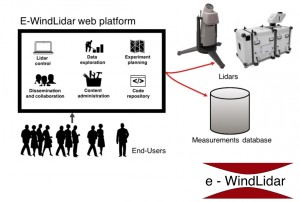 The lidar community is by its nature fragmented and scattered to a large degree. There are many small or bigger groups that operate their instruments and produce data by employing their own best practices. As the result, the data are stored in various formats, and in cases when the data is accompanied with the metadata and data reports, which is rare, no particular standards or uniform templating approach is used to provide them. This has a large negative impact on the data usage and data processing efficiency.

From the perspective of data users, in case when they are willing to use lidar data from different data creators, they would need to get familiar with various storing formats and in majority of cases they will need to be in a constant communication with data creators to properly process data. Additionally, handling datasets stored in different formats, which usually have different structures, requires development of custom code for data processing. The reusability of such code is limited.

There are numerous reasons for the present situation with lidar data, as well as with other data collected and used in the wind energy domain and elsewhere, hence, one is dominating. Until recently the roles of data creators and data users were not separated. Those who created data were the ones who used it and publish the interpretation of the processed data. This led to the situation in which data creators were selecting formats they are accustomed to, while omitting data description or not having consistent approach in describing data since they were the same people who used those data. However, the volume of data produced today is simply impossible to be analyzed solely by the staff who created them. Therefore, the roles of those who create data and those who use data obviously became distinguishing, while at the same time there is an imposed request by the European Commission to make our data Findable, Accessible, Interoperable and Reusable (FAIR). Despite these facts the ‘old’ ways of dealing with data are still preserved.

This workshop set out to provide scientists, manufacturers, practitioners and end users of lidar data: